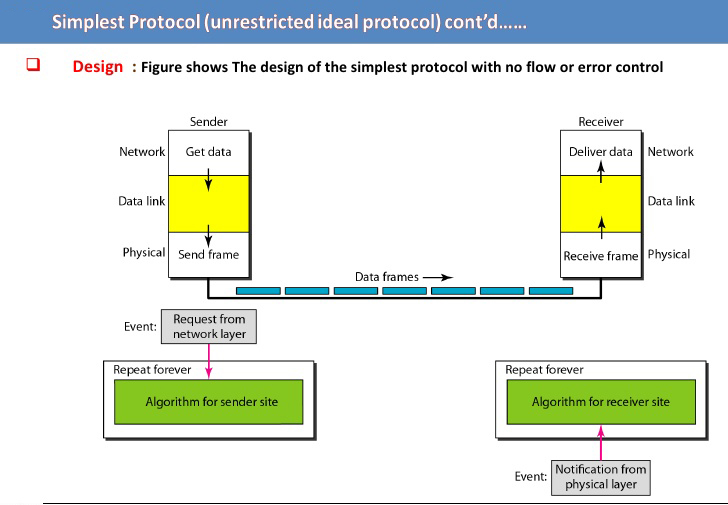 It is the simplest though unrealistic protocol with the nickname “UTOPIA“. In this case, data is transmitted in one direction only. Both the transmitting and receiving Network Layer are always ready and the proceeding time can be ignored. Infinite buffer space is available and also communication between a Data Link Layer never damages or loses frames.

acknowledgments are used; only the event type of possible frame_arrival i.e., the arrival of an undamaged frame, is bothered.

The sender is in an infinite while loop, just sending data out onto the line as fast as it can. The body of the loop consists of three actions, go fetch a packet from the Network Layer, construct the outbound frame, and send the frame on its way. Only the information field of the frame is used by this protocol because the other fields have to do with error and flow control, and there are no errors or flow control restrictions here.

The receiver is equally simple. Initially, it waits for something to happen, the only possibility being the arrival of the undamaged frame. Eventually, the frame arrives and the procedure waits_for_event receivers, with the event set to the frame_arrival. The call to from_Physical_Layer removes the hardware buffer. Finally, the data portion is passed on to the Network Layer, and the Data Link Layer setter back to wait for the second frame.